Interview with Manu by Stacy for Metalmare 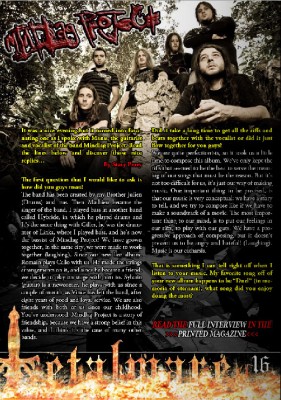 First if all I would like to introduce myself, my name is Stacy Perry and I am the owner of ADPR as well as part of the writing staff for Metalmare Magazine and in agreement with the band MINDLAG PROJECT have been intrigued to do an interview with them.

The first question that I would like to ask is how did you guys meet?

Manu (guitar/voice): The band has been created by my Brother Julien (Drums) and me. Then Mathieu became the singer of the band, I played bass in an other band called Hybride, in which he played drums and It’s the same thing with Gilles, he was the drummer of Links, where I played bass, and he’s now the bassist of Mindlag Project! We have grown together, in the same city, we were made to work together (laughing). Since our new last album, Romain plays Cello with us. He made the strings arrangements on it, and since he became a friend, we decide to play on stage with him to. Sylvain (guitar) is a newcomer, he plays with us since a couple of month, as Vince has left the band, after eight years of good and loyal service. We are also friends with both of us since our childhood.
You’ve understood, Mindlag Project is a story of friendship, because we have a strong belief in this value, and I think it’s the case of many other bands.

Did it take a long time to get all the riffs and beats together with the vocalist or did it just flow together for you guys?

We are quite perfectionists, so it took us a little time to compose this album. We’ve only kept the riffs that seemed to be the best to serve the meaning of our songs, that must be the reason. But it’s not too difficult for us, it’s just our way of making music. One important thing to be precised, is that our music is very conceptual: we have a story to tell, and we try to compose like if we have to make a soundtrack of a movie. The most important thing to our mind, is to put our feelings in our riffs, to play with our guts. We have a progressive approach of composing, but it doesn’t prevent us to be angry and hateful !(laughing)
Music is our catharsis.

My favorite song off of your new album happens to be Duel (in memoria of eternam), what song did you enjoy doing the most?

I’m very glad to hear that Duel is your favourite, because it’s like the backbone of the album, in a conceptual outlook. It deals with a crucial experience in the life of Jon De Grimpclat, the hero of the story we tell since our beginning. He’s a serial killer, but before this night, he only killed people invoking grievance that could appear like a kind of justice, because He thought that his victims deserved to be killed. But the fact to kill someone that I judge innocent; only because he saw him kill someone; just make him crazy… frayed ends of sanity (laughing)
Concerning the song that I’ve enjoyed the most, If you talk about the studio, it must be Rebecca, because the arrangement were quite difficult to make, because I knew exactly what I wanted, and I thing we’ve managed to translate the feeling that I wanted to express through it.
But the song that I like the most to play on stage must be Na Salvia, because it’s a strange one, dealing with shamanism, and it’s like we were possessed by a strange force when we play it (laughing)

Which are your favorite song(s) off of the album and how did you come up with them??

My Favourite song are Jon De Grimpclat, O mes freres and La fin absolue du monde. The first one would be the theme of the Tv series about him if it existed (laughing). This song show us the dark side of Jon, and I think it’s a good way to introduce him with the readers of Metalware.
The second deals with our hyperconsumerist society, but it’s treated in a ironic way, and by the way, it’s also a wink to the movie “A Clockwork Orange”.
The last one is an instrumental song, so just listen to it, because its meaning is a little bit in the head of everyone… only the title refers to a John Carpenter’s movie. When I see it, I had the impression that he wanted to show us that there was no fear that can even gets close to your own fear, that’s why I’ve named the song like that.

I want to thank you for conducting this interview with me and on behalf of myself and Metalmare Magazine, please feel free to contact us at anytime.

We want to thank you for everything, it was really interesting to answer your question, and I hope that my English is correct!
Read you later!
Manu
[Interview by; Stacy Perry 7-13-09 for Metalmare Magazine]